, the smaller the blocks. Small blocks make a neighborhood walkable. This diagram shows three street layouts — extremely walkable, moderately walkable, and unwalkable — with their counts of intersections per square mile:

Intersection density makes surprising news in a study by the formidable academic duo of Reid Ewing and Robert Cervero. They have published Travel and the Built Environment: A Meta-Analysis in the Summer 2010 issue of the Journal of the American Planning Association.

As the title notes, the study is a meta-analysis: a study of 50 other studies about travel and the built environment. The authors look at the results from each of the 50 studies

, and then pool all of those results into ten built environment measurements, including intersection density.

This is surprising, given the emphasis in the qualitative literature on density and diversity

, and the relatively limited attention paid to design.

END_OF_DOCUMENT_TOKEN_TO_BE_REPLACED

Part One of this essay covers the background, characteristics and drawbacks of functional classification, and evaluates some of the leading alternatives. Part Two continues by proposing a replacement, a sustainable transportation network classification, covering the block-scale and neighborhood-scale relationships. Part Three concludes by covering the city-scale relationship and the congestion-related impacts of a sustainable network.

The ideal pattern of regional growth has been debated at least since the 19th century. In the 1960s and 70s the focus of the debate sharpened on efficiency and sustainability, and the “Compact City” was suggested to be the ideal. The Compact City redirects all growth into a single urban core, maximizing density while minimizing the consumption of farms, forests and agricultural land. It explicitly counteracted the dominant trend of decentralized suburban sprawl.

Some of the benefits of the Compact City idea have been confirmed by researchers. Cities with higher density and more compact form have much less per capita driving (Newman and Kenworthy, 1999). In existing cities, the trend of sprawling suburban growth causes an explosion in the amount of auto driving; a policy of refocusing growth, mixed use and transit in the urban core will halt that explosion and slightly reduce the amount of driving (Simmonds and Coombe, 2000).

END_OF_DOCUMENT_TOKEN_TO_BE_REPLACED

Part One of this essay covers the background, characteristics and drawbacks of functional classification, and evaluates some of the leading alternatives. Part Two continues by proposing a replacement, a sustainable transportation network classification, covering the block-scale and neighborhood-scale relationships. Part Three concludes by covering the city-scale relationship and the congestion-related impacts of a sustainable network.

A sustainable network classification ideally will do several things.

To reach these goals, a sustainable network classification is proposed. The classification has three primary relationships, each applying to a different scale. The three scales are block scale, neighborhood scale, and city scale. This allows each relationship to focus on the factors most relevant to its scale, without unnecessarily confusing factors from different scales or combining them inappropriately.

END_OF_DOCUMENT_TOKEN_TO_BE_REPLACED

The report Life-cycle Environmental Inventory of Passenger Transportation in the United States bills itself as “the first comprehensive environmental life-cycle assessment of automobiles, buses, trains, and aircraft in the United States.” The report, by Mikhail V. Chester of the Institute of Transportation Studies at Berkeley, goes far beyond counting the fuel consumed by vehicles. It considers the energy and materials used to build stations

, terminals, roadways, runways, tracks, bridges, tunnels and parking, as well as maintenance, heating, lighting and more. A full life-cycle accounting of travel modes has been a long time coming; it is critically needed and tremendously welcome.

The findings on life-cycle energy use are summarized in this chart:

Read on for a summary of the findings, and a discussion of how the results are affected by urban design context.

END_OF_DOCUMENT_TOKEN_TO_BE_REPLACED 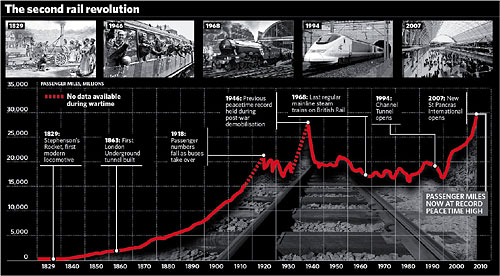 END_OF_DOCUMENT_TOKEN_TO_BE_REPLACED

On March 10, 2008, the American Public Transit Association released a closely related study that supplemented those findings. APTA’s study, The Broader Connection between Public Transportation, Energy Conservation and Greenhouse Gas Reduction, tackles the same topic from a different direction. It asks, How does the availability of transit affect land use

, its energy efficiency, and its greenhouse gas emissions — not only for transit riders but for those who don’t ride transit?

END_OF_DOCUMENT_TOKEN_TO_BE_REPLACED

Conventional wisdom holds that the U.S. is too spread out for workable mass transportation except in a few high-density cities. Urban planning expert Anthony Downs offers this explanation:

But in 2000, at least two thirds of all residents of U.S. urbanized areas lived in settlements with densities of under 4,000 persons per square mile. Those densities are too low for public transit to be effective. Hence their residents are compelled to rely on private vehicles for almost all of their travel, including trips during peak hours.

— Traffic: Why It’s Getting Worse, What Government Can Do

Is that accurate? It all depends on statistics and assumptions, both of which are endlessly susceptible to manipulation. For instance, Downs uses “settlements” as the geographic unit of analysis and calculates how many Americans live below a certain density threshold.

That’s one approach, but there are many different approaches. We could use other geographic units and find out the average density in each of them.

Looking at the entire United States, what impresses is the vastness and diversity of the land. It’s the America of spacious skies, amber waves of grain, and purple mountain majesties; of trackless tundra, sizzling deserts and rocky badlands.

But look at the urbanized area of the nation and a different picture emerges. Sixty-eight percent of Americans live on just 2 percent of the U.S. land area. Seen in this light, the large majority of the U.S. population is remarkably concentrated on the land. What implication does this have for population density?

END_OF_DOCUMENT_TOKEN_TO_BE_REPLACED 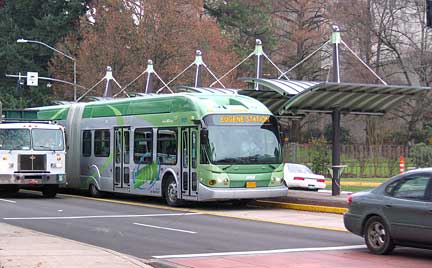