On March 10, 2008, the American Public Transit Association released a closely related study that supplemented those findings. APTA’s study, The Broader Connection between Public Transportation, Energy Conservation and Greenhouse Gas Reduction, tackles the same topic from a different direction. It asks, How does the availability of transit affect land use

, its energy efficiency, and its greenhouse gas emissions — not only for transit riders but for those who don’t ride transit?

Excerpts from The Broader Connection

This study sought to estimate the effect of public transportation availability on household travel through the medium of land use, specifically on total vehicle miles traveled (VMT). We generally refer to this effect as a “secondary” effect, compared to the primary effect of substituting a mile traveled by automobile with a mile in a bus or train. For the secondary effects described here, lower household VMT is associated with public transportation availability via built environment characteristics in cities and suburbs across the U.S. …

The study draws on the National Household Travel Survey

, which was conducted in 2001-2002. To put this finding in perspective, the United States consumed about 136 billion gallons of gasoline in 2002.

So public transit, which was responsible for 0.07 percent of all surface vehicle miles traveled (in the U.S. in 2002) reduced national energy use by the equivalent of three percent of total gasoline consumption.

The estimated savings in petroleum use from public transportation can also be expressed in terms of greenhouse gas emissions. Carbon dioxide (CO2) is by far the most prevalent greenhouse gas emitted from motor vehicles. Each gallon of gasoline burned releases 8.9 kg of CO2. The total effects of public transit availability reduce CO2 emissions by 37 million metric tonnes annually.

Another way to put this into perspective: According to the authors, the 37 million metric ton CO2 reduction is equivalent to the electricity used by 4.9 million households. 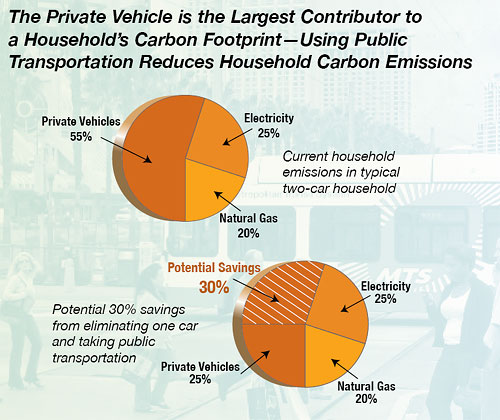 APTA Online Publications and Surveys — Many additional sources with information about the benefits of public transit.

4 responses to “APTA Study on Transit and Land Use”