Back in the day — back in the late nineteenth and early twentieth centuries — the Garden City concept was actually about gardens. That is, working, productive gardens for every household. Garden City planners said that working gardens supported the health of residents and the environmental and economic sustainability of the town. Fresh produce and fresh flowers were signal images around which the Garden City movement rallied.

But after a few decades, the Garden City label had became more of a marketing term than a literal description. Green spaces were valued for recreation and scenic qualities rather than food production. That remained true of most U.S. suburbs through the next 50 years.

In 1975, Michael Corbett designed Village Homes in Davis, CA, as a model sustainable suburb. The design utilized many complementary strategies, but in particular, Village Homes incorporated gardens and orchards throughout. That was unprecedented for a development of its scale and density.

Today there is once again a rising interest in local food production. And several ambitious Traditional Neighborhood Developments (TND) are recalling the Village Homes model. They combine new urban design principles with a strong focus on, and involvement with, community agriculture.

Serenbe does not have the usual new urbanist fabric of small blocks; it is designed in a more clustered, more serpentine development pattern. It has extensive private gardens and preserved forests, as well as a 25-acre organic farm that’s also a CSA. But in certain spots it also has that hallmark of urban environments, spatial definition. Browse the photo albums and you’ll see tightly-knit streetscapes that recall the feel of a Main Street or small-town downtowns.

A Community Supported Agriculture (CSA) farm is part of this neighborhood. Property owners have priority to buy shares in the farm, or can trade work on the farm for shares of produce. Mountainside Village is laid out for solar orientation and all homes are built to U.S. Green Building Council LEED-H standards.

Notice their disclaimer. It’s probably a good idea to be very clear about farm impacts:

There are farming operations within the community. While this may seem attractive, be prepared for adverse effects, including: dust, compost aromas, noises made by animals or vehicles at early or late hours, manure aroma, dry season with brown ugly patches of garden, delivery vehicles, and so on. 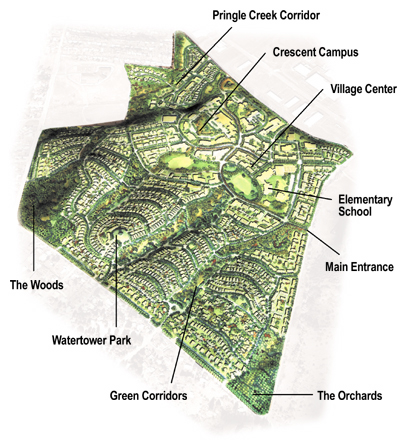 Pringle Creek is the first phase of the larger Sustainable Fairview development. All homes have maximum energy efficiency and green materials; some homes have “net zero” energy consumption. A “zero-impact” storm water system is used throughout, including experimental porous pavement to increase water infiltration. The Flower Power Biodiesel Co-Op is now operating and there are plans for a community car-share program. A community organic garden in in place and later phases are envisioned as having orchards, district heating, ecological sanitation systems, on-site geothermal energy, and a recycling/composting facility.

Another project with an agricultural theme is South Village in Burlington, Vermont. South Village is working its way through the entitlements process and is planned around a 35-acre organic CSA farm and native plant nursery. Permanent and seasonal farm housing is also planned. The development will include an ecologically-designed stormwater management system, ecological restoration, and energy efficient building designs.

Also in the entitlements process is Sky in Calhoun County, Florida. The 571-acre site plan will maintain 232 acres as agriculture and converts 105 acres from agriculture to conservation. Most of the 322 homes will be clustered into villages and hamlets. The development will include public gardens, a farmer’s market and incentives for green building techniques.

What other developments are combining walkability, mixed use, and a mix of housing types with a primary focus on agricultural activities such as permaculture, CSAs, or community gardens?

Equally ambitious, if not more so, are individual efforts to retrofit existing suburban residences into permaculture zones. There are plenty of people giving this idea a go, but the most inspiring has to be the Dervaes family of Pasadena, California. They describe their home:

The yard has over 350 varieties of edible and useful plants. The homestead’s productive 1/10 acre organic garden now grows over 6,000 pounds (3 tons) of produce annually. This provides fresh vegetables and fruit for our family’s vegetarian diet and a source of income.

We operate a viable & lucrative home business that supplies area restaurants and caterers with salad mix, edible flowers, heirloom variety tomatoes and other in-season vegetables. The income earned from produce sales offsets operating expenses and is invested in appropriate technologies, such as solar panels, energy efficient appliances, and biodiesel processor, to further decrease our homestead’s reliance on the earth’s non-renewable resources.

Some forecasters have suggested the suburbs will collapse in the face of rising fuel prices and gasoline shortages. But it seems to me if suburban residents are willing to put energy and ingenuity into their homes like the Dervaeses, then the suburbs will prosper no matter what fuel crises may happen in the future.

The American Commuity Garden Association — Growing community through gardening and greening across the United States and Canada.

, and implementing an international program focused on urban agriculture and food security.

4 responses to “TNDs With Agriculture”