Which types of urban roadways are the most dangerous? Major arterial or minor arterial? Freeway or local street? The field of motor-vehicle safety statistics is more than a century old. One would expect such a mature field to have settled the basic question of the best way to report fatality risk. But that’s not the case, and what’s more, the most common method of reporting risk may be mathematically invalid. We may be getting an incorrect understanding of the types of roadways that have the highest fatality risk.

Engineers and traffic officials often say freeways are the safest roadways and local streets are the most dangerous. That fits the view of mainstream engineering, which points out that local streets have the closest spacing of driveways and intersections, and therefore the densest occurrence of “conflict points” where crashes can happen.  Freeways and expressways have strictly controlled access in order to eliminate intersections and driveways.

That view of safety is one of the main justifications for the mandated federal policy called functional classification. The goal of functional classification is to channel a large percentage of traffic onto a small percentage of roadways, specifically freeways, highways, and arterial roads. Those roadway types are the most elaborate and designed to carry high volumes of fast traffic

, often with full or partial access control. Functional classification has been very successful at achieving its basic goal of channeling and concentrating traffic. 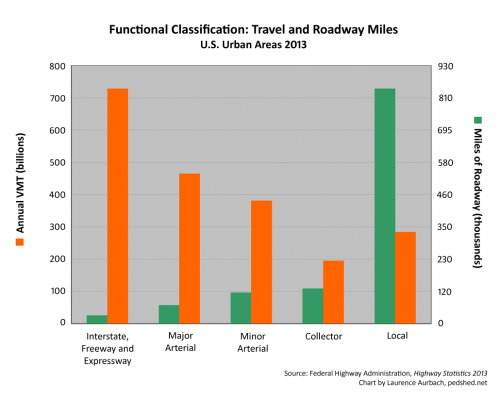 Chart 1: Distribution of urban traffic and urban roadway miles. The chart shows the United States’ skewed pattern of travel, which is largely the product of hierarchical and dendritic roadway layouts supported by functional classification.

Chart 1 shows how functional classification sorts roadways into a range of types. The nation’s skewed distribution of traffic is apparent. Seventy-seven percent of traffic is carried by eighteen percent of roadways — by the so-called “higher-class” freeways, expressways, and major arterials. Traffic in the official statistics is reported as vehicle miles traveled (VMT). National VMT is the sum of annual state estimates, which are based on gasoline consumption, traffic counters, personal travel questionnaires, and other methods.

To compare the safety of roadways, engineers and administrators adjust the raw statistics to account for exposure. The Federal Highway Administration (and indeed the entire mainstream traffic engineering field) does that by dividing the number of fatalities by VMT. In other words, they use travel mileage as the measure of risk exposure. The chart based on that metric looks like this: 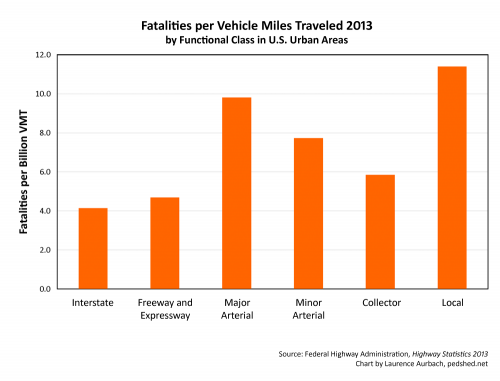 Chart 2 confirms the mainstream view. Interstates are the safest facilities and local streets are the most dangerous. But is that view truthful? Actually, the official statistics contain a critical logical flaw. VMT (that is

, travel distance) is the product of speed and time. Therefore speed is fundamentally intertwined in the fatalities-per-VMT metric. The way the variables are related produces the following outcome. For any given amount of travel time, and assuming identical roads and drivers, the fatalities-per-VMT metric will always report that faster speed is safer (see Appendix 1).

But that’s opposite to basic physics and everything we know from traffic safety research. Faster speed is more dangerous on most roadways, and it’s certainly more dangerous on full-access urban streets and arterials. Does a better metric exist?

Suppose we show the crash fatality rates in terms of fatalities per roadway miles. That metric would not be based on travel; it would be based on physical

, tangible roadways. The chart based on that metric looks like this: 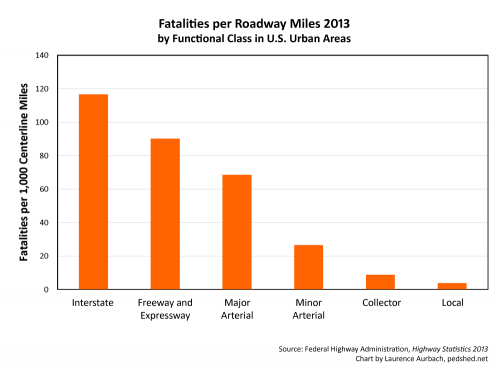 By that metric, local streets are the safest roadway type by a lopsided margin. Interstate freeways are 30 times more dangerous! The risk profile is thoroughly unlike that of the fatalities-per-VMT metric.

How can this chart and the previous chart be so completely different? And which metric is more truthful? One chart measures risk in terms of miles of driving; the other measures risk in terms of physical miles of roadway. Neither statistic represents the actual risk well. Both are biased by a highly skewed dataset: the functionally classified roadway system illustrated in Chart 1. In the case of fatalities per roadway mile

, the class of local streets has by far the most mileage of all the roadway classes. So when the number of fatalities is divided by that large number of roadway miles, the metric will show “lower class” local roads to be the safest.

To construct a better metric, we can take guidance from the fields of public health and environmental science and use exposure time. Traffic fatality risk can be measured as fatalities per hour of exposure. The problem with that is we don’t know how much time vehicles spend on each functional class of roadway. But if we know the average speed on each functional class of roadway, we can make an estimate.

From a study of vehicle activity patterns in California (Barth et al. 2007), I have derived the average speed on each functional class of roadway (see Appendix 2).

With this information we can construct a metric. The miles driven can be divided by speed to produce hours of exposure. (In other words, distance / rate = time.) The chart based on that metric looks like this: 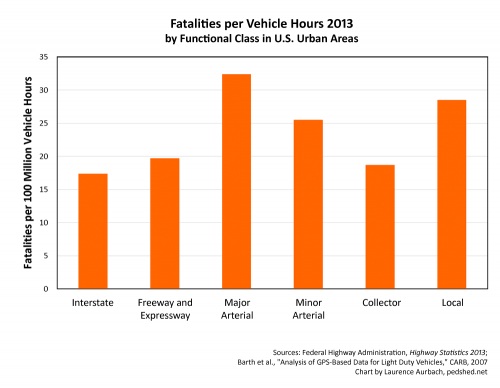 The chart is roughly similar to the fatalities-per-VMT chart, but it has notable differences. Based on each hour of exposure, major arterials are the most dangerous facilities and local streets the second-most dangerous. Collector streets are about as dangerous as freeways. The spread between the various roadway classes is smaller than that of the other metrics.

The fatalities-per-vehicle-hour metric is good for understanding the risk of an hour of travel. However, the story doesn’t end there. An hour of travel on street A might be more dangerous than an hour of travel on street B. But if you spend many more hours traveling on street B each year, then you’ll be exposed to more risk on street B each year. The number of hours we as a nation spend on any particular roadway type is affected by our cultural patterns — factors like cultural preferences, government policies, infrastructure investments, suburban sprawl, provision of mass transit, and so on. 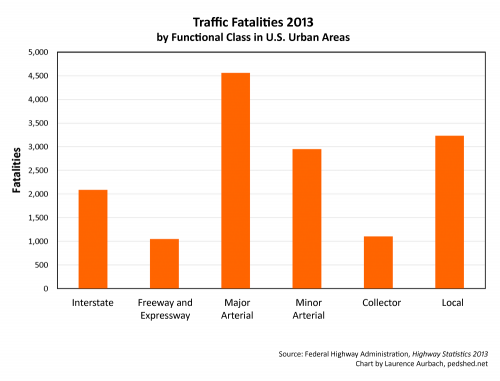 Another way of representing the national systemic risk is to sort the roadways by posted speed limit. A chart that uses that sorting looks like this: 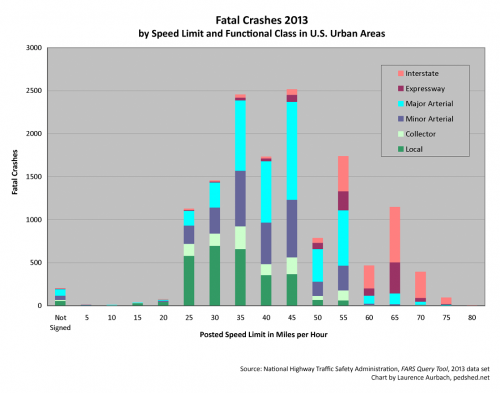 , your chances of being in a fatal crash are much greater on the faster, “high-class” streets, arterials, and highways.

The fatalities-per-VMT metric is logically absurd and inappropriate for policy decisions. State and federal governments continue to use it because the collection of VMT statistics

, after many decades of practice, is a generally well-understood and routine process.

The fatalities-per-capita metric is best for comparing the systemic traffic risk of communities, states, and nations.

The fatalities-per-exposure-hour metric is best for comparing the traffic risk of individuals. It also allows comparisons between modes that are otherwise difficult to compare, like walking and bicycling. It is rarely used because data about exposure time on functional classes of roadways is hard to obtain. However, GPS tracking is now installed in nearly all new cars. Vehicle tracking by cell phones, electronic toll passes, and other methods is developing and becoming more common. The collection of average-speed or exposure-time information may already be feasible for national statistics and eventually may become as routine as the current process of estimating VMT.

The magnitude of such a reform task should not be underestimated. A nationwide, multiyear administrative effort would be required to change the procedures in every state. Various agencies, associations, and research groups would need to develop the methodological details, and the federal government would have to coordinate the implementation. The task would be great but the benefits could make it worthwhile.

Credible and truthful metrics should be used when making comparisons between different roadway classes and their geometric designs, speeds, and urban contexts. Our national policies about roadway design and layout should be informed by better safety metrics.

, Sex, and Period of Week,” by C. Craig Morris presents several equations that reveal logical flaws in the fatalities-per-VMT metric. Equation 1 is the general definition of risk.

Equation 1 is translated into the transportation context to produce Equation 2. According to Morris, all the common measures of transportation fatality risk exposure are a function of person time.

Both sides of the equation are divided by speed to produce Equation 3.

, both sides of the equation are multiplied by vehicle occupancy to produce Equation 4.

This is equivalent to the fatalities-per-VMT metric. Speed is in the denominator, so the higher the speed, the lower the risk. The variation of vehicle occupancy by distance is unknown; surveys suggest all but a few vehicles carry 1 or 2 occupants.

In order to estimate the average speed of roadway functional classes, I derived speeds from the 2007 study “Analysis of GPS-Based Data for Light Duty Vehicles” by Barth, Zhu, Boriboonsomsin, and Ordonez. The study used two GPS vehicle activity data sets collected from Californian households in 2001. The data sets recorded the activity of 1,040 cars making 8,965 trips and traveling 44,235 miles.

I derived speeds from Table 4.3 (p. 24) with the following assumptions and methods:

1. I assumed nearly all of the data was recorded within urban areas. The maps on pages 17-19 suggest that is so.

Please note this study was the best source I was able to find related to the average speed on roadway functional classes. If better sources exist I will be interested to learn of them.

Thanks to C. Craig Morris at the Bureau of Transportation Statistics, U.S. Department of Transportation. Mr. Morris helpfully explained some of the principles in his research report on traffic fatality risk.

Much gratitude to Kanok Boriboonsomsin, associate research engineer at the Center for Environmental Research and Technology, University of California, Riverside. Professor Boriboonsomsin gave valuable feedback about my derivation of average speeds on roadways and suggested the weighting method to average two data sets.