In the 1920s and 30s the architect Le Corbusier issued several emphatic rejections of such ideas. “DEATH TO THE STREET

,” he thundered, decrying the traditional streetscape as dangerous, unhealthy, chaotic, and congested. The ideas promulgated by Corbusier and other modernist planners were in tune with the needs of the motor industry: dispersed towers

, wide buffers, and large highways. The design of new highways and arterials in cities came to resemble the auto-oriented visions of modernist planners.

One condition keeping the debate alive is the various arguments, theories, and polemics lack solid empirical support. Many designers and engineers have a gut feeling about the best way to design streetscapes but statistical evidence is thin. Several streetscape surveys have been developed

, and researchers have used them to carry out a few studies. The surveys require teams that manually evaluate each street segment using checklists of tens or hundreds of factors. The process is laborious, slow, and expensive; and as a result, the studies to date have been limited and somewhat inconsistent.

Harvey’s study evaluated streetscapes within the city boundaries of Boston, New York, and Baltimore. The streetscapes were located generally in high-density core districts and medium-density peripheral neighborhoods. More than 7,400 miles (12,000 km) of thoroughfares were studied, representing about 65 percent of all public thoroughfares in the three cities. The thoroughfares were divided into segments bounded by intersections to produce 122

The analysis started at the centerline of each street and “moved outward” in one-meter steps. Each step was tested for the presence of building footprints. The step with the largest increase in building footprint area was assumed to contain the vertical street edge that pedestrians could perceive most clearly.

Method to identify the vertical edges of streetscapes.

Once the edges were identified on both sides of each street

, other measurements became possible. These included the width of the streetscape, the height-to-width ratio, and the continuity of the streetwall. The length of each street segment was measured, as well as the number of buildings per length. The study also calculated for New York City the proportion of streetscape surface area covered by tree canopies. 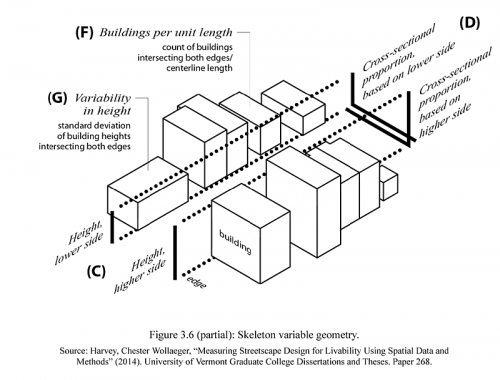 Some of the variables used to characterize streetscapes.

To test the influence of these measurements on streetscape appeal

, the study linked New York streetscapes to a pedestrian preference survey. The MIT Place Pulse study was an online survey that displayed two photos of different streets side by side and asked, “Which place looks safer?” Harvey processed the results to create scores for 635 streets in three boroughs of New York City. Each score was based on approximately 34 votes.

The relationship was tested by regression analysis and was found to be strong. The measures of streetscape form explained 42 percent of variability in perceived streetscape safety. Tree canopy coverage alone explained slightly more than half of that variability. The full model with two control variables added (median household income of nearby blocks and WalkScore of each street segment) explained 46 percent of variability in perceived safety. Harvey summarized the findings:

The skeletal proportions of streetscapes across New York City have an impressive effect on their appeal. In general

, streetscapes with the greatest enclosure, fostered by substantial tree canopy, many individual buildings, and large cross-sectional proportions, are the most visually appealing. Tree canopy offers the strongest positive effect. Importantly, Walk Score is far less predictive of appealing streetscapes than skeletal variables, indicating a clear distinction between the block-scale design of streetscapes and neighborhood-scale destination accessibility. Both are likely important to urban livability, but neither serves as an adequate proxy for the other. Neighborhood affluence also has a relatively minor effect on streetscape appeal.

The streetscape variables from all three cities were processed with statistical calculations to produce four streetscape types, or “streetscape skeletons.” Each streetscape was assigned to one of four types:

When applied to the city street maps, the skeleton types reveal useful information about the character of streets and the structure of neighborhood centers and corridors. 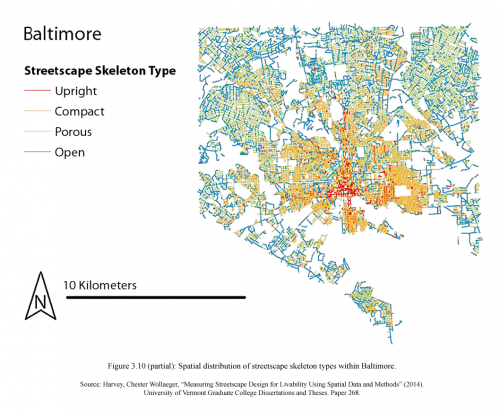 As Harvey notes, applying the evaluation method to suburban streetscapes, and to other cities in the U.S. and around the world, would produce a more universal analysis. Combining streetscape form with traffic speed and volume data would certainly make the evaluation of streetscape livability more complete. The analysis also could be extended to include sprawl types, such as tall-open streetscapes (i.e., towers in the park), “train wreck” building layouts where no particular streetwall can be discerned, and blocks with very large setbacks that contain parking lots or lawn/berm/buffer installations.

Finally, the large-scale data set created by the study permits a wide variety of additional relationships to be examined. Streetscape form can be compared to pedestrian counts, property value and rent, retail sales, crime rates, and many other phenomena. Indeed, Harvey and co-author Lisa Aultman-Hall studied the relationship of streetscape form and traffic safety, in a paper to be presented at the Transportation Research Board Annual Meeting in January 2015. This is the abstract:

,000 crashes. Logistic regression models indicated that crashes on smaller, more enclosed streetscapes were less likely to result in injury or death compared with those on larger, more open streetscapes. These results point to infill development and street tree planting as nontraditional safety countermeasures that are consistent with additional livability goals such as walkability, high quality public realm design, and provision of natural amenities.

Streetscape design is traditionally overlooked as an approach to improving traffic safety on urban streets, though traffic operation is inherently affected by built environment context. Highway safety engineering traditionally promotes widening and removing obstacles from roadside “clear zones” to reduce collision potential. A contrasting framework proposes that more enclosed streetscapes may incentivize slower, less risky driving and therefore improve both livability and safety outcomes. Such a strategy may have particular relevance along urban arterials, where large clear zones may be impractical due to complex adjacent land uses and promotion of livable spaces is of increasing focus.

, the method developed in “Measuring Streetscape Design for Livability Using Spatial Data and Methods” represents a significant advance in the field of urban design. Three-dimensional city maps, which show the footprint of every building and its height, are becoming more widespread, accurate, and easily accessible. The automated evaluation of streetscape design will help to verify urban design theory and support more powerful planning and design tools. Of course, the method is no substitute for human judgment. Ultimately, however, it should help to create excellent streetscapes so that all urban dwellers may benefit from higher-quality surroundings.

Le Corbusier. The City of To-Morrow and Its Planning. Translated by Frederick Etchells. London: The Architectural Press, 1929.