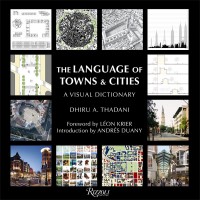 I’m very pleased to say The Language of Towns & Cities: A Visual Dictionary has been published and is available for purchase. The massive tome was written by Dhiru Thadani with more than fifty contributors. I was the editor of the book as well as a contributor.

My leading observation is that the title is a misnomer. It’s not a visual dictionary, it’s a visual encyclopedia — a combination of reference book and coffee table book. It represents about 15 years of creative production by Dhiru, including his maps of urban spaces around the world and his insights from 30 years as an architect and town planner. Numbers also tell the tale: the book consists of 804 pages; more than 500 subject matter entries ranging from single paragraphs to full essays; and more than 2,500 diagrams, illustrations, and photographs.

The book is physically heavy and bulky. Its dimensions are 10.4″ x 10.4″ x 2.75″ and it weighs 9 pounds… not what you would call a portable book. Once it gets parked on a desk or coffee table, it’s not going to move far. 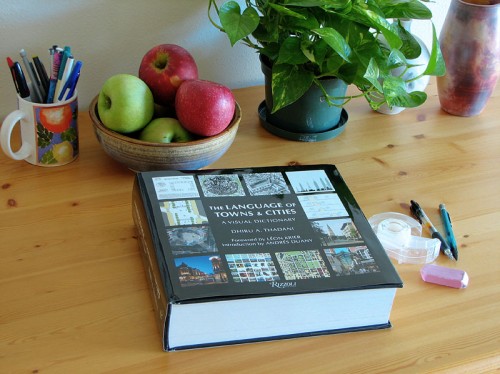 The Language of Towns & Cities is a fine example of the craft of bookmaking. Credit is due to Rizzoli Publications and the Chinese firm that manufactured the book. It is beautifully printed

, with heavy coated paper stock that showcases the vibrant, lush photography. The binding is sturdy and lies flat at any page, which many books these days are not made to do. 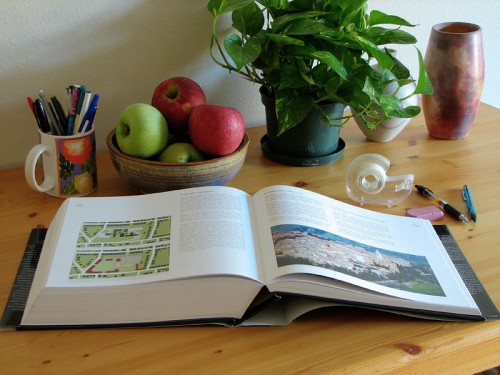 The authorial tone of the book is accessible and straightforward, aiming for clarity rather than obfuscation by jargon. Indeed, The Language of Towns & Cities is a work of anti-jargon, because it introduces concepts, defines terms, explores patterns, and reveals history.

Being an encyclopedia, The Language of Towns & Cities is arranged alphabetically. Rob Krier’s review on Amazon.com describes his childhood joy at browsing reference works. Krier says that reading Language made him feel the same way. Each flip of the page brought a different subject into view, encouraging serendipitous exploration and discovery.

To sum up, Language combines beautiful images, a wide variety of subject matter, accessible writing, and fine bookmaking. I call it the ultimate browsing book on urban design.

What follows is the dust jacket book description, list of contributors, and a sample from the book including the complete table of contents.

This is the descriptive text I wrote for the dust jacket, based on Dhiru’s input:

Unique in format and expansive in scope, The Language of Towns and Cities surveys the world of urban design and planning with deep admiration and meticulousness. Architect and town planner Dhiru A. Thadani, and more than fifty expert contributors, brings a wealth of knowledge and experience to this blend of encyclopedia, illustrated design manual, and stunning photoessay collection.

More than ever before, the quality of urban places is of critical importance to the world’s population. Over half of humanity resides in urban areas, and growth is continually increasing. Poor urban design and planning is bringing about many negative impacts, from inequitable slum conditions to social isolation to the crushing burden of excessive roadways and traffic. This book empowers citizens with the knowledge of city planning and urban design to demand a more humane built environment for all.

Unlike the medical and legal professions, architecture and planning do not possess a common language to discuss urbanism. Words have been and continue to be misused to communicate ideas, elements, and visions of cities. The Language of Towns and Cities addresses this by visually defining terms and ideas related to the built environment, illustrating their use, application, and best practices.

The book is organized alphabetically, with each word, name, or concept described in text and images. Key personalities in the history and evolution of urban place-making are introduced in concise biographical portraits. Plans and profiles of the greatest examples of town and city design span the full sweep of history, from antiquity to the present day.

With over 500 definitions, articles, case studies, biographies, and essays, plus thousands of exceptionally informative diagrams and sumptuous photographs, the book is a visual feast for all urbanists, from novice to expert.

Front pages from The Language of Towns & Cities in PDF format, including table of contents, brief statement of book concept, acknowledgments, and complete list of subject matter entries. 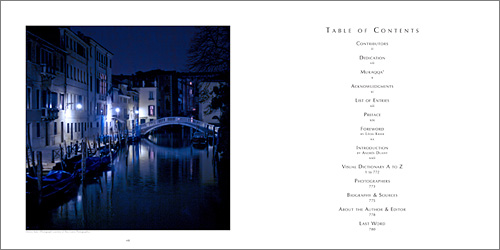 Bartman, Dan, The Language of Towns and Cities, Examiner.com, December 8, 2010.

Weinstein, Norman, How New Urbanism’s Case Triumphs Best Through “The Language of Towns & Cities: A Visual Dictionary” by Dhiru A. Thadani, ArchNewsNow.com, January 14, 2011.

National Endowment for the Humanities

Gruber, Frank, Talking Urban: A Review of The Language of Towns and Cities by Dhiru A. Thadani, Huffington Post, March 4, 2011.

The Language of Towns & Cities wins the Gerd Albers Award 2011 from the International Society of City and Regional Planners, October 26, 2011.

Brussat, David, An Encyclopedia of Cities and Towns, Architecture Here and There Blog, Providence Journal, December 8, 2011.

6 responses to “The Language of Towns & Cities”