The winners of the Prix Rotthier pour la Reconstruction de La Ville 2008 have been announced, and they are gems. The Prix Rotthier prizes are given once each three years, and the theme of this year’s competition was “the best urban neighborhood built in Europe in the last 25 years.”

Not only are the winners beautiful and functional, they were judged to have been conceived and designed according to many of the principles of sustainable development and the EU Green Paper for the Urban Environment. These include revitalization of existing cities and suburbs with compact, mixed use development; integrating land use and transportation for more walking, biking, public transit and fewer motor vehicles; harmonious small and medium industry; energy efficiency and green building; waste reduction and recycling; parkland and integrated soil and water management; and not least, to “defend the architectural heritage against the uniform banality of the international style, respecting rather than imitating the old.”

The competition has done a service by providing tearsheets with site plans, photos and statistics on each of the ten winners. However, descriptive material is lacking (until the catalog is published in late 2008), so this post will give capsule descriptions of three neighborhood-scale projects, along with links to more information. 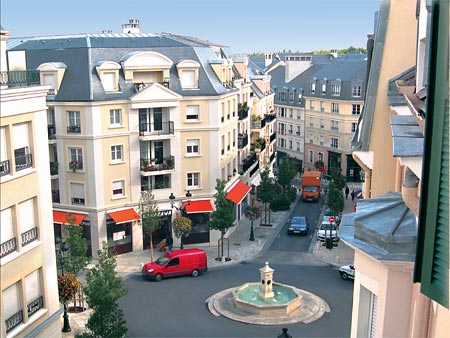 Plessis-Robinson is a suburban town on the outskirts of Paris (near Versailles) with a history dating back to the 14th century. It has long identified itself as a garden city and a pleasure destination. The very name, Robinson, comes from its early 20th-century small restaurants with music and dancing, set among the trees in the manner of the Swiss Family Robinson. When Mayor Philippe Pemezec was elected in 1989, however, three-quarters of the city’s residential stock was dilapidated public housing. Led by Pemezec, the city undertook a comprehensive building program to reclaim its title as an sustainable green city of flowers.

Much of the public housing was renovated, while other sections were demolished and redeveloped. The redevelopments recognized by the prize (Coeur de Ville, Quartier du Bois des Vallées, Cité Jardins, and others) were created between 1993 and 2005, and make a hodgepodge of old and new development patterns that is seen in the aerial view. One of the architects (Atelier Brietmann) called it a transformation from “from a dormitory town into a city”:

The old garden city, built in the ’50s, with its horizontal bars and its repetitive facades, with its cramped and non-adaptable dwellings, could not be rehabilitated in an economic and spatially acceptable condition. Its demolition has led to the arrangement of the downtown core on a composition of islets, streets and squares. The picturesque and residential aspect of this new area is highlighted by the development of a comprehensive plan of water in the heart of a park around which the new islets are organized.

In February 1945 the allied forces bombed the city of Dresden, Germany. Over 90 percent of the historic city center was destroyed. For many years the rubble was preserved as a war memorial, and popular sentiment kept the Communist authorities from turning the central plaza into a parking lot. In 1993 the iconic Frauenkirche began rebuilding, and after 13 years of meticulous, magnificent reconstruction work, re-opened to international fanfare.

As the church was being rebuilt, plans were underway to restore the surrounding “Neumarkt” district to a condition like its historical configuration. The concept plan to restore the original blocks and buildings was put into action when the city designated the area as redevelopment zone in 2002. Five new blocks have been built to date; more are planned.

, urban redevelopment, parks and natural areas, allotment gardens, and mobility management. About 57 percent all trips are by walking, biking and transit; the city’s extensive and unusually diverse transit system includes light rail, commuter rail, long-distance rail, buses, ferries, a funicular railway and cable cars. Between 1996-2005 the commuting mode share for automobiles decreased from 73 to 62 percent, while the share for transit increased from 13 to 19 percent. Dresden is a member of the Climate Alliance of European Cities and has reduced its CO2 output more than 25 percent since 1987. 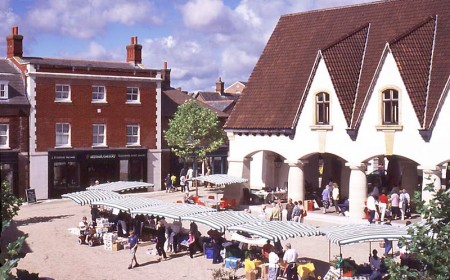 Poundbury is the most famous, postcard example of new urbanism in the UK. This 400-acre extension to the town of Dorchester will have 5,000 residents and 2,000 jobs by the time it is completed in 2025. There is a great deal of material available about Poundbury but its environmental features are less well-known, so that is what this profile will focus on.

Poundbury is a pedestrian-oriented, mixed use village that has a good jobs/housing balance, 20 percent affordable housing, and energy-efficient buildings constructed of local and recycled materials. One hundred and fifty acres (38 percent) are preserved as parkland and natural land. When Poundbury was planned in 1988, this combination of features represented a radical departure from conventional real estate development practice. Today, however, the principles of sustainability have progressed, and Poundbury aims to maintain its place at the leading edge of UK’s eco-urbanism.

In 2006, 11 dwellings on Peverell Avenue were built to the top standard of green building (BREEAM “excellent” rating & National Home Energy Rating of 10 out of 10). They included rainwater harvesting and efficient fixtures that cut water use in half, photovoltaic roof tiles, solar hot water, heat recovery ventilation, and micro combined heat and power generation. As an experiment in technology, finances and traditional design, the dwellings won fast market acceptance and set the stage for a large-scale expansion of sustainable development at Poundbury.

Also in 2006, a Sustainability Assessment was performed that made a variety of recommendations to improve green performance. A Development Brief laid out the vision for the next phases of Poundbury. The goals going forward are:

All new houses in the UK will be required to be zero-carbon after 2016. The builder ZeroC is getting a head start in its ZeroC Poundbury West project:

– “Greener houses will cut down the gases