On November 26, 2007, professors Erle C. Ellis and Navin Ramankutty published a conceptual model and map that revolutionize the story of global ecosystems. The conventional view, which can be found in millions of atlases and introductory textbooks, is an aggregation of ecosystems called biomes. Biomes are classified by vegetation, climate and location, and have exotic, suggestive names like “Tropical Mountain Systems,” “Temperate Oceanic Forest” or “Boreal Tundra Woodland.”

Biomes also suffer from a notable deficiency: The humans are missing. In certain important respects, the conventional biome map is a fantasy, an image of the earth minus the influence of people and their land uses.

And have we ever had an influence! As Ellis and Ramankutty note, humans have been redesigning, re-engineering and remaking the land such that “the vegetation forms predicted by conventional biome systems are now rarely observed across large areas of Earth’s land surface.” Today, in the year 2007, “more than three quarters of Earth’s land surface has been reshaped by human activity.” 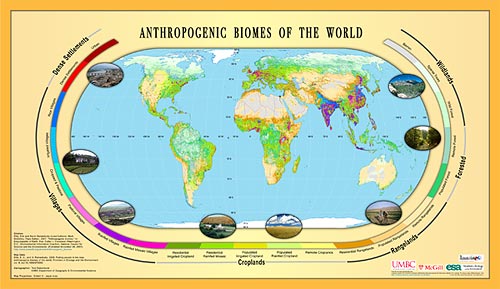 Thus the need for a new conceptual framework for global ecology and a new global map. The conceptual framework is based on human biomes (also called anthropogenic biomes, or “anthromes”) and the new global map is based on satellite images, population statistics, and GIS analyses. The new framework has interesting implications for resource management, land use planning and the environmental ethics underpinning many policies and regulations.

We’ve known for a long time that humans have had a profound influence on the earth. One thread in the historical literature is the story of decline — deforestation, erosion, and general depletion of the land and sea. The Earth as Modified by Human Action by George Perkins Marsh recounted this story on the global scale back in 1874. Books like Deforesting the Earth represent a modern retelling with better data and economic analysis.

Another thread is one of renewal and stewardship. Perhaps the earliest examples can be found in Biblical injunctions for the stewardship of Creation. More recently, arguments have been put forward for the positive role humans play in natural ecologies, as we improve biodiversity and the general health of the land. Gardeners of Eden by Dan Daggett is an example of this line of thought. A Newsweek article, The New Jungles, described how some urban areas are more hospitable to wildlife than their surrounding agricultural lands.

I believe these attempts to redeem the potential of human influence are better served by Ellis and Ramankutty’s anthrome model. First, a model that includes humans provides a more accurate and realistic view of global conditions. Second, such a model provides firmer operational support for humankind as planetary stewards. No longer are we continually chasing after an ideal of pristine nature that doesn’t exist in the first place. Instead, we have leapt ahead of the trends, turning to view what we have wrought with a paradigm that lets us recognize and confront our true role on this planet.

This new model of the biosphere moves us away from an outdated view of the world as “natural ecosystems with humans disturbing them” and towards a vision of “human systems with natural ecosystems embedded within them.” This is a major change in perspective but it is critical for sustainable management of our biosphere in the 21st century.

Sustainable ecosystem management must therefore be directed toward developing and maintaining beneficial interactions between managed and natural systems, because avoiding these interactions is no longer a practical option. … [E]cologists can and should do more to “come home” and work where most humans live. Building ecological science and education on a foundation of anthropogenic biomes will help scientists and society take ownership of a biosphere that we have already altered irreversibly, and moves us toward understanding how best to manage the anthropogenic biosphere we live in.

The global map, summarizing years of work, is exactly the sort of visualization that opens minds, helps to deliver a new paradigm, and gets media attention. (As a topic of further investigation, I wonder if there are ways to classify ocean areas as “wild” and “reshaped by humans.”)

All of this goes to illustrate the ecological footprint concept in very useful and productive ways, ways that we may be able to work with rather than simply fret about. The ramifications for urban planning are not yet clear to me, yet I believe the effects of the anthrome model ultimately will be pervasive.

Ellis and Ramankutty discussed the political and educational implications of their work in a recent blog post.

On the one hand, we are convinced, as are many, that it is time to give up on the “protecting fragile nature” approach to conserving a desirable environment. Managing nature in preserves and leaving the rest of the world to its own devices does not and will not achieve our objectives.

On the other hand, what we desire may not be good for us. There may be great danger in proceeding with a democratic approach to the environment — the many may choose the shopping mall over the nature preserve. Indeed, many already have.

Yet we see no other option but to aim straight for our goal: a desirable environment to live in over the long-term, based on informed collective governance of ecosystems. As Winston Churchill said about democracy — “Democracy is the worst form of government except all those other forms that have been tried from time to time.” Viewing nature as a part of human systems encourages people to take responsibility for their ecosystems rather than just thinking of them as “the fragile nature out there.”

It is our hope that in this century we can improve our environmental governance by building a citizens’ “morality of nature” through education and participation, rather than by fear of the consequences. Indeed, there are many indications already that we are getting better at managing the environment, and that the regenerative powers of nature are cleaning our rivers, regrowing our forests, and healing the ozone layer.

We are already in the driver’s seat. If our collective desire leads us to conserve, preserve, and restore “Nature,” we will all be the better off for this. But managing nature as if everything we touch is destroyed just will not get us to where we want to go.

I am particularly struck by the anthrome conceptual model that appears in Ellis and Ramankutty’s “Putting people in the map.” It is remarkably similar to a planning concept called the rural-to-urban Transect, first conceived by Patrick Geddes and lately refined into an open-source zoning code called the SmartCode.

In particular, the anthrome chart (Figure 3 in “Putting people in the map”) and the SmartCode diagram are impressively similar in concept and presentation. Professor Ellis tells me that he finds the rural-to-urban Transect materials interesting, but has never seen them before. This makes me wonder if the Transect zone model of human environments is an emergent pattern, a model that arises independently in a variety of disciplines by virtue of its analytical, explanatory and communicative powers.

Ellis, Erle C. and Navin Ramankutty, Putting people in the map: anthropogenic biomes of the world. Frontiers in Ecology and the Environment, 2008; 6, doi: 10.1890/070062. Also available from Ecotope.org.

The Encyclopedia of Earth article on anthropogenic biomes includes a print-quality wall map and PowerPoint presentation.

UPDATE 19 May 2010: Professionally printed wall poster versions of the map are available.

The global maps can be viewed online in Google Earth at the Encyclopedia of Earth.

Coverage by the Wired Science Blog and a University of British Columbia interdisciplinary seminar blog.

Discovery Channel news feature on anthropogenic biomes, Human Influence on Ecology Mapped, including an interview with Erle Ellis. The same feature is also available as a YouTube video.

US Forest Service: Ecosystem Provinces of the U.S.

The Earth as Modified by Human Action by George Perkins Marsh (1874).