About 30 urban planners, city officials, council members and developers traveled from Chico, CA to visit Hercules Waterfront District in January, 2007. They went there to experience in person the new urban development in the San Francisco suburbs and to gauge its strengths and weaknesses.

A reporter with a Chico newspaper traveled with the group, wrote two articles about the visit, and assembled a slideshow.

As they toured Hercules, officials considered how its lessons might apply to codes and development in Chico. A similar development is being proposed for Chico, as well as a city-wide zoning code that would make construction of such developments much easier. 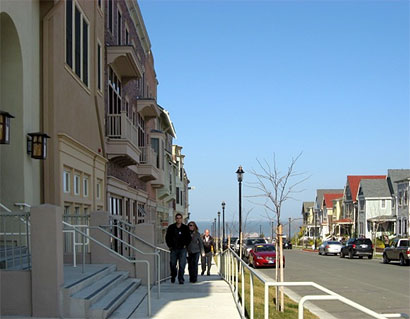 Three comments about the photo above. One, the sidewalk would be better if the handrail between it and the planting strip was removed. Traditional urban design didn’t bother with micro safety interventions like that. Traditional urban design assumed people were capable of negotiating a range of topographical challenges. Chances are the handrail is there because of some safety regulation or another, or because of worries about insurance liability. As far as I can tell it does nothing to improve handicap access (but correct me if I’m wrong).

Two, the photo shows attached, mixed-use buildings with front terraces facing detached single-family homes with front yards. Generally, urban designers frown on having two very different building types face each other on the same street. Time will tell if breaking the rules has created a satisfactory living environment in this case.

Three, the bayside character of the development is prominent. In general, the photos of Hercules Waterfront District show a neighborhood that’s similar in many ways to the attractive, yet unremarkable neighborhoods that were prevalent in the Bay Area before World War Two.

About the January tour. New Urban Builders is proposing to build a development called Meriam Park in Chico. Meriam Park will have 2,300 houses, townhouses and apartments on 272 acres, and will include a retail district, a church and a minor league baseball park. The developers are advocating a form-based code in Chico to allow Meriam Park and similar developments to be built with less delay and red tape. They brought city officials to Hercules to see how that works in practice.

New urbanists tout this kind of development as a choice. Instead of one kind of house with one price in a subdivision, residents pick from a mix of residences. Lawton said Hercules’ code now has nine different kinds of streets, ranging from streets to lanes to bicycle paths.

All developers building in the waterfront area must follow the form-based codes, which define what the city expects, from the streets to the building frontages. Lawton said the actual style of the buildings is less important than the placing of the homes.

The city officials were favorably impressed with Hercules Waterfront District, finding it to be both community- and business-friendly. The form-based code has allowed construction to proceed quickly, efficiently and with good design quality. The officials also felt some aspects could be improved.

However, [Chico Planning Commissioner Jon] Luvaas did think some areas needed be tweaked a bit for Chico. He said some areas appeared too uniform and he would like to see more different kinds of style.

[Chico Mayor Andy] Holcombe said one major difference he noticed between the Hercules waterfront and Meriam Park is that the waterfront district is relatively isolated from the rest of the city. A major highway and wetlands divide the two. The mayor said that meant the city didn’t have to worry about the neighbors and had an easy interface to the rest of the city.

[New Urban Builders President Tom] DiGiovanni said some of the Hercules residences were early attempts of some large merchant builders, and the massing and detailing were not executed as well as New Urban Builders wants.

, perhaps we can learn from them and not have to make these same mistakes,” Luvaas said.

The Hercules visit was a great idea on the part of New Urban Builders and Chico officials. You can lecture and show photos until you’re blue in the face, but nothing matches the impact and value of an in-person visit. Visiting in person is the best way to explain what good urban design is about, and how planners and developers are achieving it in the context of contemporary market and regulatory conditions.

Meriam Park itself is notable as the first full-scale neighborhood plan in the U.S. by designer LÃ©on Krier. Krier has been a pathbreaking leader in urban design since the 1970s, and became famous when he designed the new town of Poundbury in the UK for the Prince of Wales.

Krier was the lead designer during the Meriam Park charrette in December 2003. Now, after three years of working through the entitlements process, Meriam Park is approaching the final approval stage. The Draft EIR Application has been filed with the City of Chico, showing the plans for Meriam Park in meticulous detail. Here is the proposed master plan for the development.

Note: The above articles and associated slideshow may go behind a paywall at the end of February, 2007. As an alternative, the photos may be found in the newspaper’s photo gallery.

Krier designs his first US town