, filmed in black and white, is a paean to Progress (with particular attention to the field of highway engineering). Then at minute 7:50, the film switches to Technicolor and begins a tour of the Futurama exhibit — a vision of the futuristic world of 1960. Throughout the film, narration is intoned in a reverent, quasi-religious manner backed by portentous skating-rink theremin music. 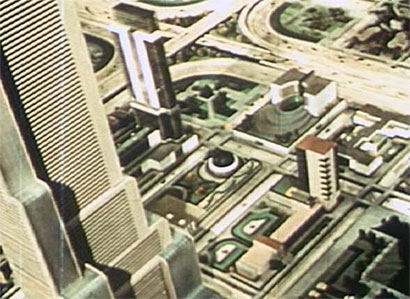 At 14:30 the automated freeway lanes are explained.

At 17:30 the great metropolis of 1960 is described, in almost all respects exactly opposite to the principles of new urbanism. “Residential, commercial and industrial areas all have been separated for greater efficiency and greater convenience,” states the narrator. “On all express thoroughfares, the rights of way have been so routed, as to displace outmoded business sections and undesirable slum areas whenever possible.” 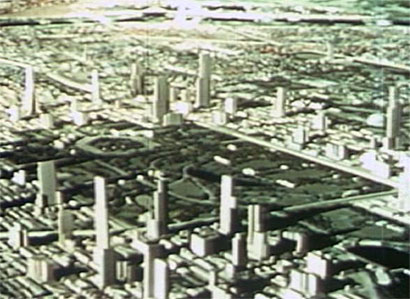 At 19:50 close-ups of the downtown intersection are shown, which then cut to a full-size outdoor mock-up of the same street section. 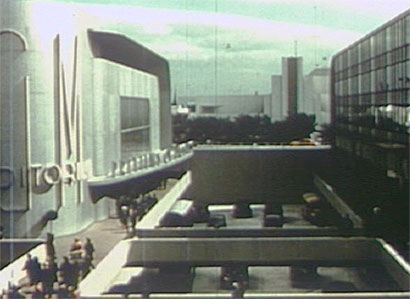 The film concludes with “Fantasia”-like animation and ever more heated rhetoric about Progress and the Great American Way.

The Futurama exhibit was the most popular at the Fair; observers said there was never a break in its long waiting lines. After the Fair closed in 1940, designer Norman Bel Geddes planned to take the exhibit on the road — or, more precisely, to the air, traveling the U.S. in a giant Zeppelin.

However, preparations for war were making Futurama’s message superfluous. GM and Ford were already heavily involved in German war production. Germany invaded Poland in late 1939, and the theme of the Fair changed from 1939’s “Building the World of Tomorrow” to 1940’s “For Peace and Freedom.” By mid-1940 GM was gearing up for domestic war production and the need for a nationwide campaign to envision a superhighway future was eliminated.

The film “To New Horizons” is part of the Prelinger Collection of the Internet Archives. The film is available in several different formats, which are listed along the left-hand side of this page. Here is the Internet Archive’s help page for viewing movies. The Internet Archive recommends VLC Media Player and MPlayer for Mac. Other players that may work are regular Quicktime and Real Player, Windows Media Player, and programs that play DVDs on your computer.

• Photographs and tour of the GM Pavilion and Futurama ride from the collection of Paul M. Van Dort.

• Background research for the stage show “Boozy: The Life, Death, & Subsequent Vilification of Le Corbusier” including: