Today the government of Queensland, Australia, released its taskforce report titled Queensland’s Vulnerability to Rising Oil Prices. The report found that Peak Oil is real, and that preparations are essential:

The Taskforce considered the question of whether and when world production of oil will peak. The range of creditable predictions for a world peak oil situation run from 2005 to 2040, with the mean and standard deviations of all academic and industry predictions being 2013, ± 7. The Taskforce concludes that the overwhelming evidence is that world oil production will peak within the next 10 years.

The report recommends risk mitigation approaches such as reduction in consumption of liquid fossil fuels; alternative fuels, technologies and strategies; and preparation for demographic and regional changes, as travel, work and living habits change in response to rising fuel prices. In regards to the latter 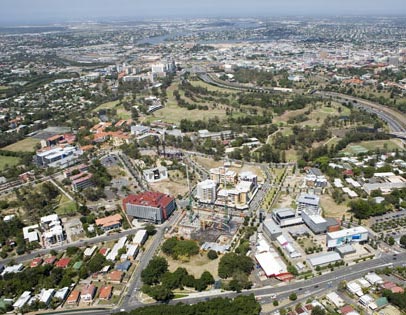 3. Prepare For Demographic and Regional Changes

There is likely to be a major change in demographics, compounded by the ageing population. Under high oil prices in future, it is likely that the outer suburbs of our major cities will become fragmented, with potential decline driven by transport cost concerns. Conversely, government should anticipate more people moving to some rural, regional and coastal areas with work, schools and shops available within smaller, largely self-contained geographic areas.

Town planning (involving the explicit adoption of the principles of new urbanism, walkability, connectivity, in-fill, and higher density residential living) and the abandonment of support for urban sprawl will be a key policy tool. The protection of not just green space, but agricultural land in and around our major population centres will be a key determinant of food costs and liveability.

Energy efficiency and sustainability need not lead to lower standards of living than we now currently enjoy. However

, failure to anticipate the inevitable change in the energy framework on which our society and economy now rests, will certainly impact negatively on all of us, and particularly on those who can least afford it. Emerging liquid fuel constraints brought on by peak oil means that we must now consider encouraging change in the layout and design of our cities and in the behaviour patterns of society.

From now and over the coming decades, government will need to take a much more proactive role in managing the decline of oil, energy management focussing on the major challenges of rising user demands and energy security, and addressing the related issue of climate change.

This process needs to begin immediately, if large scale social dislocation is to be avoided or at least minimised. The costs of preparing too soon will be infinitesimal compared to the costs of reacting too late. 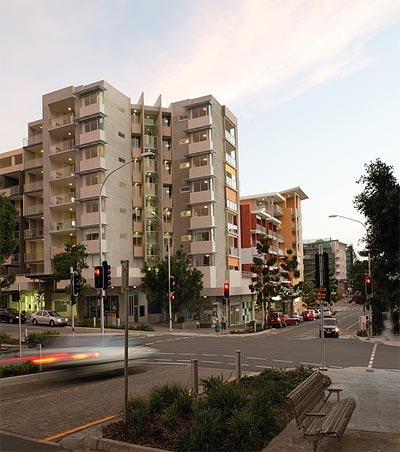 A streetscape in Kelvin Grove Urban Village with a mixed use building completed in 2006. Photo: The TVS Partnership

The lead author of the report, Andrew McNamara, was a member of parliament when the report was written. Now he serves as a minister in the Queensland government. Upon release of the taskforce report, McNamara said,

I’m now in the unique position, as the Minister for Sustainability, Climate Change and Innovation, of having to co-ordinate a whole-of-Government response to my own report.

Obviously, as the report author, I have some ideas on what needs to be done, based on what I discovered as part of preparing the report, and the report makes a range of recommendations.

Queensland is the second-largest state in Australia and has a population of 4.2 million.

Australian Council for New Urbanism — An informal alliance of Australian and New Zealand practitioners, who are working together to improve the quality and sustainability of urbanism.

Town Paper TND List — A list of traditional neighborhood development (TND) websites from around the world, including several in Australia.