In the 1920s and 30s the architect Le Corbusier issued several emphatic rejections of such ideas. “DEATH TO THE STREET

,” he thundered, decrying the traditional streetscape as dangerous, unhealthy, chaotic, and congested. The ideas promulgated by Corbusier and other modernist planners were in tune with the needs of the motor industry: dispersed towers

, wide buffers, and large highways. The design of new highways and arterials in cities came to resemble the auto-oriented visions of modernist planners.

One condition keeping the debate alive is the various arguments, theories, and polemics lack solid empirical support. Many designers and engineers have a gut feeling about the best way to design streetscapes but statistical evidence is thin. Several streetscape surveys have been developed

, and researchers have used them to carry out a few studies. The surveys require teams that manually evaluate each street segment using checklists of tens or hundreds of factors. The process is laborious, slow, and expensive; and as a result, the studies to date have been limited and somewhat inconsistent.

END_OF_DOCUMENT_TOKEN_TO_BE_REPLACED

This wonderful drawing is from the Downtown Precise Plan of Redwood City, California. It show 21 signage types that are commonly encountered in pedestrian-oriented, mixed-use frontages, streets and districts.

The drawings are by Dan Zack, project manager of the city’s community development department. The layout is by Freedman Tung & Bottomley, lead urban design consultant for the Precise Plan.

In the extended entry, a key to this drawing with short definitions of each sign type from the Downtown Precise Plan.

END_OF_DOCUMENT_TOKEN_TO_BE_REPLACED

Washington Post columnist John Kelly looks at street curbs in Answer Man Favors Accessorizing the Streets. Kelly receives a question from some DC visitors who notice that the curbs are made of attractive granite instead of prosaic concrete. They ask,

As we had recently upgraded our own kitchen surfaces with granite, at a cost of several thousand dollars, we wondered how the use of such an expensive material can be justified by the city.

Turns out the granite saves labor and money in the long run. Ordinary concrete lasts 10-20 years depending on usage and conditions, while granite lasts many decades or even centuries.

Yes, it’s more expensive than concrete — about $45 per linear foot vs. $25 — but it’s more durable, said Abdullahi Mohamed, a supervisory civil engineer with the D.C. Department of Transportation.

Granite — solid, heavy — resists road salt and errant snowplow blades. When there’s roadwork to be done, granite curbs can be lifted up, set aside, then put back in place.

Apart from the bookkeeping issues are those of community pride and urban beauty.

Answer Man thinks that wherever possible we should strive for beauty

, even in the lowly and the mundane. After all

, Washington is a city of straight lines, from the grid that Pierre L’Enfant drew when he laid out the city to the knife’s edge walls of the National Gallery of Art East Building. Granite curbs help to crisply delineate the landscape, separating street from sidewalk and reminding us that it’s nice to live in a beautiful city.

Planners and urban designers often talk about the “human scale” in walkable areas. But what does that really mean — is it simply a case of “I know it when I see it”? Are there more specific ways for people to describe why some building frontages seem especially friendly and welcoming? 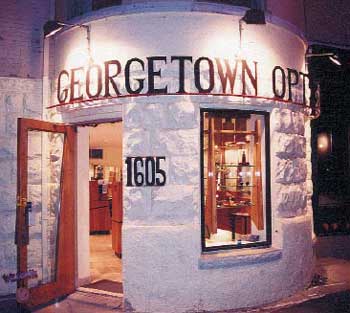 For the design of storefronts, a very useful booklet is Thrive: A Guide to Storefront Design in the District of Columbia (2002), by Derrick Lanardo Woody. The booklet covers the elements of human-scale storefronts in an easy-to-understand format and with plenty of photos.

END_OF_DOCUMENT_TOKEN_TO_BE_REPLACED

At first glance the notion of free-market parking meters seems impossibly arcane. But as Donald Shoup pointed out in a recent NY Times editorial, “cruising for curb parking generates about 30 percent of the traffic in central business districts.” Shoup studied Westwood Village, next to the UCLA campus, and found that drivers searching for curb parking created 950,000 excess vehicle miles of travel per year. That’s equivalent to 38 trips around the earth, taking place in just one retail district in L.A.

Shoup calls the impacts of parking space cruising “astonishing,” and he’s right. The unnecessary traffic congestion hurts downtown businesses and activities. The extra miles traveled waste gasoline and generate pollution. If curb parking could somehow be freed up so that it was always easy to find a space, then that extra waste and pollution could be eliminated.

One solution is free-market parking. Set parking meter prices so that 85% of spaces are occupied and 15% are open at any given moment. This idea has been getting more attention lately, and Redwood City, CA is the locality that has put the most advanced implementation into action.

END_OF_DOCUMENT_TOKEN_TO_BE_REPLACED 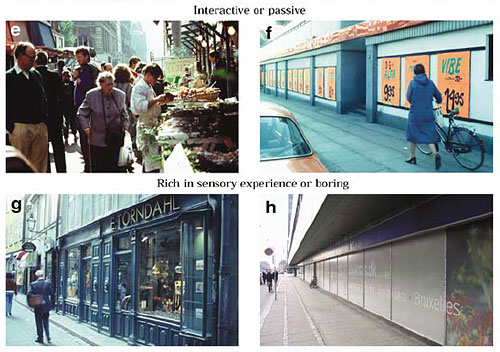 END_OF_DOCUMENT_TOKEN_TO_BE_REPLACED

Many of the building elements that people relate to beauty are also the most transitory. Elements like facade color

, cladding, window treatments, etc. are the easiest things to change. So when Wal-Mart, for instance, wants to show that it’s addressing community concerns about aesthetics and context, they’ll clad their big boxes in styles that reference local heritage in some vague way. Hill Country stone in Austin, rustic trusses in Colorado, Georgian brick in the Mid-Atlantic, etc. But the end result is still a tilt-up, single-story big box in a sea of parking.

END_OF_DOCUMENT_TOKEN_TO_BE_REPLACED

Street trees: valuable neighborhood amenity or safety menace? Many traffic engineers and municipalities take a dim view of arboreal canopies near corners. Now, offering a more positive view, comes Street Trees and Intersection Safety by Elizabeth Macdonald et al. It is probably the most complete investigation of this topic to date, and is nicely readable (for an academic study, that is). Here is some of the opening paragraph:

The study derives from a rather simple, straightforward observation: that on the best tree-lined streets the trees come close to the corners. They do not stop at some distance back from the intersecting street right-of-way. Indeed, in Paris, a city noted for its street trees, if the regular spacing of trees along the street runs short at an intersection, there is likely to be an extra tree placed at the corner. For at least 250 years, the finest of streets the world over have been associated with trees. (p. 7)

The study looks at regulations that have the effect of prohibiting trees on corners, or of stripping street corners bare. Often these regulations are ad hoc and discretionary: